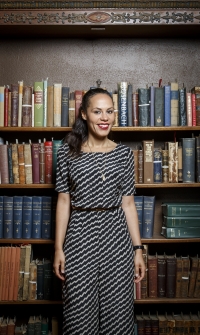 Danielle Burns Wilson has almost two decades of experience as an art professional. She served as Chief Curator at the Houston Public Library and Manager of the African American Library at the Gregory School. Wilson is also an adjunct professor at Lone Star College, North Harris Campus. She received her B.A. in history and political science from Prairie View A&M University, and her M.A. in art history from the City University of New York, Brooklyn College. Wilson began in 2001 as Development Coordinator at the University Museum at Texas Southern University. She also worked at the Allen Shepard Gallery in NYC and the Saint Louis Art Museum where she was the distinguished Saint Louis Art Museum's Romare Bearden Fellow 2008-2009. Other fellowships include the Mickey Leland International Enhancement Fellow where she studied contemporary East African Art at the University of Dar Es Salaam in Tanzania.  From 2010- 2013 Wilson served as curator at the Houston Museum of African American Culture (HMAAC). With Michelle White of the Menil Collection, Wilson organized The Whole World Was Watching: Civil Rights Era Photographs from Edmund Carpenter and Adelaide de Menil and in 2011 she was a guest curator for Curate NYC. In 2016, she organized the popular exhibition Sunday Go To Meeting: African American Women and Church Hats in Houston. In 2018, she opened, Chasing Perfection: The Work and Life of Architect John S. Chase. The show recently traveled to the University of Texas School of Architecture. Wilson received the distinguished Pace Setters Award in 2014 from the Association of African American Museums (supported by the National Museum of African American History and Culture in Washington DC).