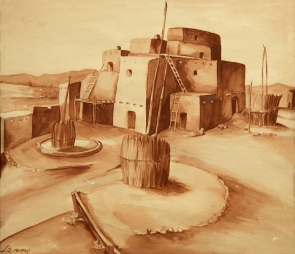 The Nancy and Ted Paup CASETA Research Initiative Award - to be presented to an eligible upper level undergraduate or graduate student from the states of Texas, Colorado, Louisiana, New Mexico and Oklahoma in History, Art History, Education, or other related fields to pursue original academic research related to the history of early Texas art and artists. Curatorial staff at any art museum located in Texas and independent curators/researchers working on projects related to early Texas art are also eligiable to apply.  This award carries a monetary award.

Rebecca J. Martin was awarded the Nancy and Ted Paup CASETA Research Initiative Award, for the research to prepare an expanded biography on Harold Arthur Roney (1899-1986) who was noted for dignified portrayals of nature and in his early career, he was dubbed “The Painter of Texas Skies.”
Loving the Land: Early Texas Artist Harold A. Roney and the Legacy of the Leon Springs Art Colony tells the story of Harold Arthur Roney, which is "ripe to explore and savor as he had a significant place in the early Texas art movement and his affiliation with the Leon Springs Art Colony between 1929 –1931 contributes to understanding his commitment to en plein air practice."

Rae Pleasant was awarded the Nancy and Ted Paup CASETA Research Initiative Award, “for her project to transcribe the Tyler, Texas Black Film Collection that is part of the G. William Jones Film and Video Collection, Hamon Arts Library at Southern Methodist University in Dallas.

The transcriptions will be put in bound books and disseminated to relevant repositories such as libraries, universities, and museums. This project received support from the Nancy and Ted Paup CASETA Research Initiative which includes CASETA donor funds. Ms. Pleasant will also produce a five page research paper on African American film and cultural history and in particular examining the ways African American Vernacular English, which weaves through the TTBFC films, is crucial to this understanding.

The University of Texas at El Paso

Research project examining the State of Texas Building within Fair Park as a functioning monumental object in hopes of illustrating Texas identity through visual analysis and historical memory.