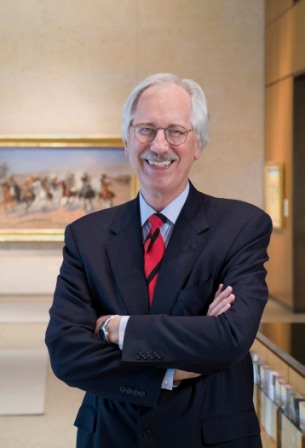 Ron Tyler is the retired director of the Amon Carter Museum of American Art. He has also served as a professor of history and a director of the Texas State Historical Association and the Center for Studies in Texas History at the University of Texas at Austin, where he edited the Southwestern Historical Quarterly and The New Handbook of Texas (6 vols.; 1996). Ron has authored and edited a number of books and articles, including Prints of the West (1994), Audubon’s Great National Work: The Royal Octavo Edition of The Birds of America (1993). Visions of America (1983), Alfred Jacob Miller: Artist on the Oregon Trail (1982), The Image of America in Caricature and Cartoon (1976), The Cowboy (1975), The Big Bend: A History of the Last Texas Frontier (1975). He and his wife, Paula, co-authored Texas Museums: A Guidebook (1983). Ron continues to research, write, and lecture, and is working on a history of lithographs related to Texas.